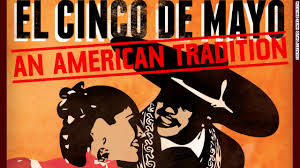 In America Cinco de Mayo has evolved to become one of the country’s largest drinking holidays. In 2013, over $600 million dollars worth of beer was sold, according to Nielsen data, which is more beer than is sold for St. Patrick’s Day or the Super Bowl, two holidays where beer consumption is the primary focal point. And most of that beer is Mexican in origin, which has also meant that the Mexican beer sector, thanks to Cinco de Mayo, has continued to grow and thrive north of the border, experiencing the best sector growth in the American market according to EuroMonitor data, second only to the rapid growth of American craft beer.

Suffice it to say, Cinco de Mayo is a behemoth when it comes to selling booze, but how did a holiday that isn’t really even celebrated in Mexico – Mother’s Day, which occurs around the same time, is a much bigger deal – become not only the most powerful U.S. holiday when it comes to selling alcohol, but also the only connection most Americans have to our largest immigrant group? You can thank Texas distributors of Corona in the 1980s.

Cinco de Mayo commemorates an obscure battle, the 1862 battle of Puebla, about 80 miles outside of Mexico City, when an outnumbered group of Mexican fighters were somehow able to defeat the French army – though the victory was short lived, as less than a year later the Mexican troops were driven back, and Mexico City was ultimately captured. To many, the holiday is pretty insignificant and is no where near as important to Mexicans as Independence Day, which occurs on September 16th, yet ask most people celebrating at the bar, and Mexican Independence Day is the answer most people will give for the meaning behind Cinco de Mayo.

The holiday originally gained significance in America thanks to the growing push for Mexican-American civil rights in the 1940s and ‘50s. The Chicano movement formed in the 1960s with the stated goal of empowering Mexican Americans to embrace their cultural heritage, and celebrating Cinco de Mayo became a useful tool in connecting these new citizens to the story of America as a whole. That’s because the 1862 battle of Puebla not only impacted citizens of Mexico, it potentially impacted the fate of the Union. The French were the ones backing the Confederate army in America’s civil war, which was occurring at the same time, and their attack on Mexico City was described by Mexicans as if the French had opened a second front of the same war – meaning Mexicans and the Union had a common foe. The resulting victory by the Mexican army slowed down French support of the Confederates north of the border, which helped solidify Mexico’s assistance in securing the fate of the Union. It’s a great story that allows America’s largest immigrant group to feel even more connected to the history of the country they now inhabit, and the Chicano movement was instrumental in spreading the celebration of this holiday to Mexican cultural centers across America. Yet, though the holiday gained in popularity among Mexican immigrants in the ‘60s, ‘70s and ‘80s, it remained relatively insular. While more Mexican Americans began celebrating the holiday as a way to embrace the connection between Mexican and American culture, most other American groups had no idea the holiday existed. But in 1989 the San Antonio based Gambrinus Group, who were the regional importers of Corona and Grupo Modelo, launched a Cinco de Mayo themed ad encouraging Mexican Americans already celebrating the holiday to make it a priority on this day to drink Mexican beer. The campaign took off.

What occurred in only eight short years was the holiday solidifying itself more as a time to drink Corona than a time to acknowledge the deep connection America and Mexico share. By 1996, consuming Corona as a way to celebrate Cinco de Mayo was the core way most people acknowledged the holiday’s existence, a huge victory for the Corona marketers. That year Gambrinus marketing manager Don Mann said, “Corona is the first thing that comes to mind when customers think Cinco de Mayo.”

As the holiday has grown in popularity, its connection to the original meaning has continued to weaken, while its excuse to party has drastically increased. Much of this has to do not only with the adept marketing of companies like Corona – who spend $1 on Cinco de Mayo promotions for every case of beer sold – but also the time of year in which the holiday falls. Early May signifies the true start of spring in most of America, just as the weather is turning balmy and with Memorial Day almost four weeks away, many Americans are looking for any excuse they can get to be outside celebrating in the sunshine. According to The Wall Street Journal, the difference in spend for Americans on a normal weekend compared to a holiday weekend can be as much as $500 million, so making a big deal out of Cinco de Mayo is good for business. Compound that on top of the fact that most Americans associate Mexican cuisine with warm weather, and you’ve got the perfect combination for an epic party. All most alcohol marketers need to do at this point is just add a little fuel to the fire.

The post How Corona Made Cinco De Mayo An American Holiday appeared first on VinePair.