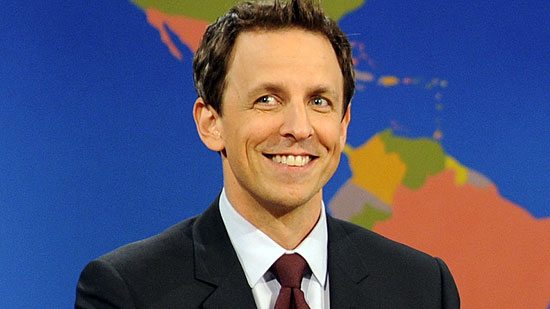 Previously, I described the ideal wine to accompany The Tonight Show Starring Jimmy Fallon. Although Fallon’s versatility is mirrored by the same characteristic of a Chenin blanc, this pairing doesn’t lend itself so neatly to other late night hosts. Let’s explore, for example Fallon’s successor, and the man who follows him on the NBC lineup, Seth Meyers.

As a Northwestern-educated, former SNL head writer, Seth Meyers’s intelligence is obvious. For almost a decade, Meyers used his acerbic wit and dry humor on Weekend Update. When he was announced to succeed Fallon at Late Night, the decision seemed logical; the two men had worked together at 30 Rockefeller Plaza and both had successfully helmed the Update desk for years.

However, when the new Late Night premiered last February, it became immediately apparent how different these two men are. Unlike his predecessor, Seth Meyers isn’t curating a silly iteration of Late Night. Instead, this thinking man’s talk show is complemented perfectly by the dryness of a Sauvignon Blanc.

On LNSM, there are no instantly viral celebrity bits, no over the top goofy games. Instead, Meyers engages in witty banter with his band leader, Fred Armisen, and performs cerebral, high concept sketches. Meyers also has invited New Yorker Editor, David Remnick, to assist in live-action reenactments of the magazine’s famous cartoons.

Low in sugar and high in acidity, much like Meyers himself, Sauvignon Blanc is typically characterized as refreshing, crisp and “grassy,” due to its herbaceous flavors. Because of this, it pairs nicely with a variety of greens and spices, like parsley, basil and fennel, as well as a number sautéed vegetables. Additionally, the acidity also greatly compliments a number of white meats and fish.

However, because Sauvignon Blanc is rarely aged in oak, it maintains a great deal of the bright fruitiness that is inherent to the grapes themselves. This quality is echoed in Meyers each night, as he curates a program that remains unapologetically loyal to who he is. “Seth’s Affirmations” is a recurring segment in which Meyers’s writers pen biting jabs at his expense that he reads aloud for the first time. The sketch is refreshing in its ownership of some of the qualities that differentiate Meyers from his peers, like his lack of edge or how unrelatable his passions are. He often shifts the attention of the show to his beloved dog, Frisbee, an Italian Greyhound who appears to be quite spoiled.

Meyers stays true to the original intention of the late night talk show by making the interview the focal point of his program while allowing the host’s personality to shine through. So too does the Sauvignon Blanc remain loyal to the source’s profile. When enjoyed together, you can be certain that you are in for an evening of refreshing, delightfully dry entertainment.