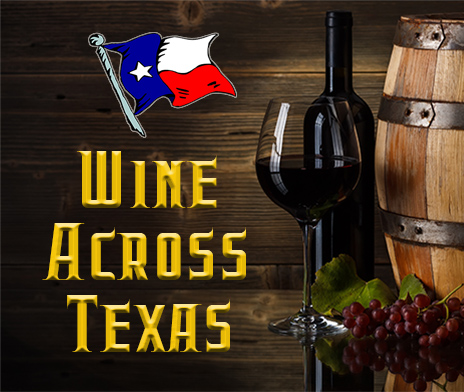 “The most important question we had to ask them was, ‘Can a girl in a bikini ride through the vines on a motorcycle?’  That’s what we needed to know.  Although, in the end, it was really a guy wearing a wig,” said Will Moore, when asked about his selection process for Texas vineyards as sets for his film.  In the end, he picked William Chris Vineyards in Hye, Texas for their incredible tasting room, and Duchman Family Vineyards in Driftwood, because they would allow the motorcycle.

Satellite of Love, an independent, locally shot film, just celebrated their Video on Demand release on Mar. 5.  Screened in twelve festivals around the nation including The Austin Film Festival and The Hill Country Film Festival, the movie is now available for download.  I met with director Will Moore, producer John Michael Measells, and music director Jonathan Case to discuss their experience with Texas wine during the filming.  The movie was shot all around the Hill Country and Austin, featuring locations like Justine’s, Apache Shores off Lake Austin.

Roughly based on the 1960’s French film, “La Collectionneuse,” the story revolves around two couples meeting for a weekend in the California (but really Texas) wine country.  Opening scenes in the movie show that the men were best friends, one now married to the other’s ex-lover.  When they all arrive for their vacation, a sexy DJ from Barcelona is thrown into the mix, now dating the still-single friend.  Add wine, beautiful countryside, music and yes, girls on motorcycles (and bicycles), and the film plays around the questions of monogamy and the delicate messiness of the human heart.

The cast members are professionals, coming from productions like “The O.C.,” “True Blood,” and “Snakes on a Plane.”  They even found Patrick Bauchau an original leading man in La Collectionneuse and flew him over from France to play the role of vineyard owner and resident sage.  Their videography is stunning and highlights the beauty of the Texas Hill Country. 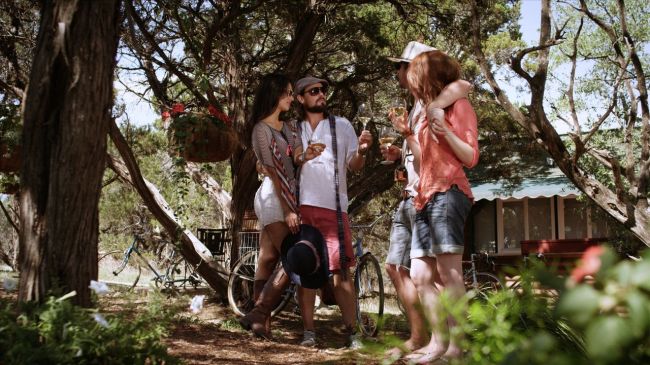 Will Moore and his wife spent six months location scouting, which, he says, primarily consisted of staying in Fredericksburg, going to wineries, drinking wine and hanging out.  In the process, they joined a handful of wine clubs that now ship wines to their home several times a year, an added bonus to the research.

There were two features Moore searched for when scouting out a perfect Texas winery: proximity to Austin for ease of travel, and permission for a girl in a bikini to ride a motorcycle through the vineyards.  Their initial choice was Becker Vineyards, but after talking to Duchman Family Winery, they decided it was better for its proximity to Austin.

They chose William Chris Vineyards for a different reason: the tasting room.  “It looks like someone’s home in the middle of nowhere,” Will Moore explained.  “The inside is so unique.”  It is crafted out of a farmhouse from the early 1900’s, refurbished by wine makers Bill Blackmon and Chris Brundrett. 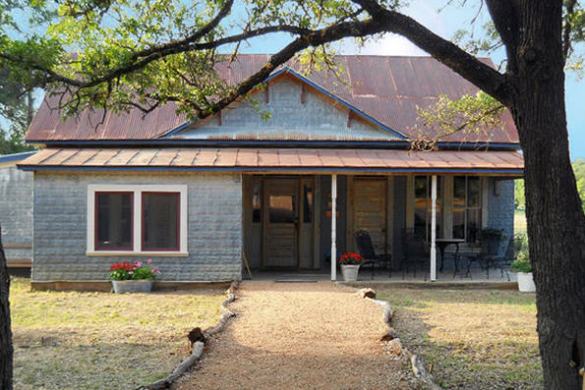 One of its most defining features is the ceiling, covered in colorful barn doors and the film does a beautiful job showing it off in one, long shot.  Moore said they did not close the tasting room on the day of the shooting, but just moved the sample wines outside.  People were crammed in the windows, trying to catch a glimpse of the filming.  They only shot for a half day, but Moore, Measells, and Case all confirmed that everyone had at least one bottle of wine a piece before continuing on the day. Their favorite William Chris wine was the 2008 Enchanté, and a bottle of it is featured in one of the shots.  Producer Measells said he particularly enjoyed drinking it with his corn nuts on site.

Duchman Family Winery proved to be a great adventure.  They started the day by getting one of the equipment trucks stuck in the mud.  An employee of the Salt Lick BBQ and Tasting Room came over to free them.  The day was spent filming in the beautiful vineyards, riding bikes and motorcycles through the vines.  The cast, again, drank a lot of wine on site and tried most of the varieties and blends available.  They bought several cases of the Duchman Sangiovese 2010 and Moore, again, joined the wine club. 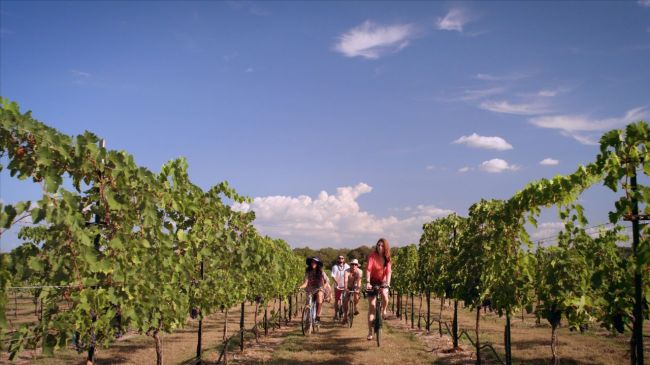 To see footage of our beautiful Hill Country and of these wineries, and to see an shining example of a thought-provoking, locally written and directed film, download a copy of Satellite of Love from iTunes.