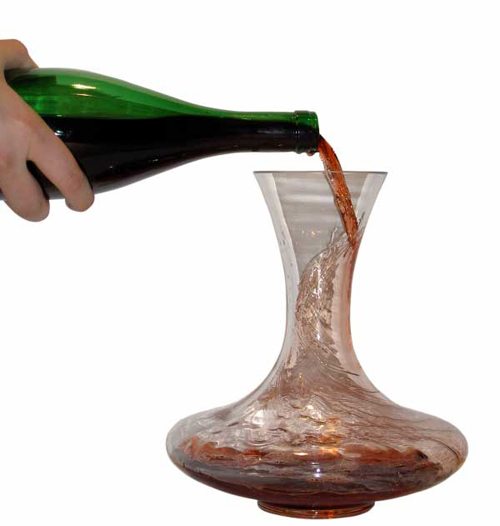 Opening your bottle of wine, you stare longingly at the beautiful air-blown glass vessel set upon the table, a gift from your wine geek pal that’s been sitting in your cabinet for months now. Your anticipation fills as you pop the cork, ready to pour one of nature’s greatest phenomenons into the crystalline form, fantasizing the red glory cascading along the inner walls, only to be laid to rest in the bulbous base, refracting the light of the setting sun whispering through your window. You pause, stare at the decanter and ask, why am doing this? What is this decanting thing all about in the first place and why do we continue this age-old ritual? Does it even serve a purpose?

Back in the day, winemaking was a messy business. We didn’t have the technology available that exists today to clarify a wine (the process of extracting loose organic material from the wine that may compromise the end product). Because of this, wine was often decanted to separate existing and formed sediment swimming around in the bottle. One would grab a candle and set it beside a decanter, once the bottle was opened, they would pour the wine out of the straight sided, high shouldered bottle against the background of the flame into the decanter, watching carefully as the bottle emptied. With eyes focused on the shoulder of the bottle as it came to the last bit of wine, when they saw that sediment was gathering in the shoulder, they’d stop pouring. Two things happened here: one, the wine was successfully separated from any sediment and two, the wine was able to begin opening up as oxygen soaked in and began the aeration process. Sounds pretty romantic, huh? Well, it is!

Today, decanting is less of a requirement than it is a show. It’s fun to do and looks great on a dinner table. That’s why every retailer from Crate and Barrel to Bed Bath and Beyond sells them and why they end up on almost every wedding registry. But they do also serve a purpose scientifically. A decanter encourages the aeration of a wine – which means they deliberately expose a wine to oxygen, the natural component that aids in the release of alcohol and begins the browning process (binding oxygen with brown quinones) so that the nose of the wine (or bouquet in older aged wine) can sing to you in the form of poetic descriptors, such as rose petals and strap leather.

With winemaking technology where it is today, the art of clarification has been mastered, eschewing the need to perform the decanting ritual to remove sediment, save for wines that have aged for quite some time and may have some “throw off” (sediment) after years of naturally fining in the bottle. But that doesn’t mean you shouldn’t use one. If you are like most of the population and don’t drink expensive aged wines every night, that $20 bottle your wine merchant so zealously suggested and got you all excited about is probably a current vintage or still very young, so may I suggest that when decanting it that you wait until everyone has sat down to eat and then upend that puppy into your vessel — just let it glug glug out of the bottle. This will expedite the aeration process and make you look cool and confident. Because the wine’s young, there’s no need to let it sit in the decanter for a long period of time; decanting it aggressively provides all the aeration you need.

If you’re having a nice dinner for two and buy an older more expensive bottle, you can try the old school method with the candle (or a lamp) and look just as cool. And even with an old bottle, I only suggest letting it sit for a max of 30 minutes before starting to enjoy it. You want to enjoy the entire process of a wine’s evolution, not just what it tastes like at the finish!

The post The Ritual Of Decanting appeared first on VinePair.